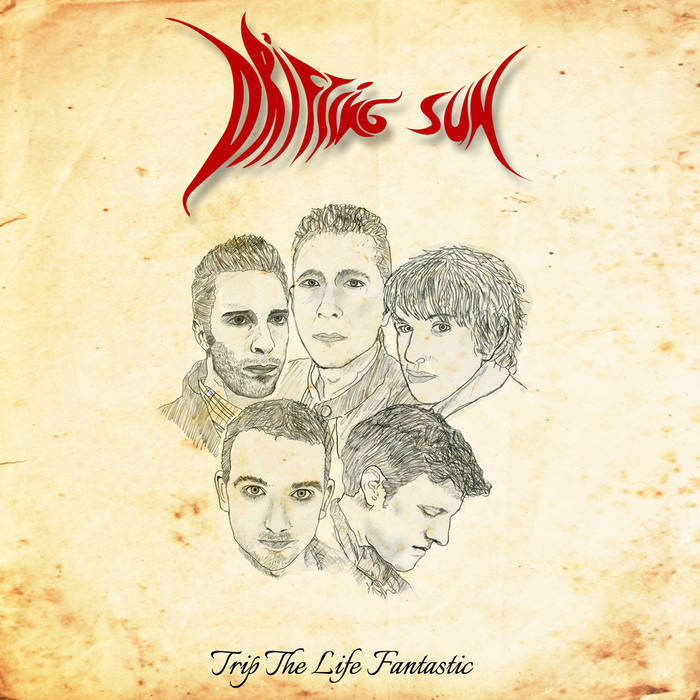 Sven B. Schreiber (sbs) To me, "Trip The Life Fantastic" was a must-buy on "Bandcamp Friday" this time. It's one of the few "Drifting Sun" albums not already found in my collection, and an essential one, because it marks the beginning of the prolific collaboration of composer/keyboardist Pat Sanders and lyricist/singer Peter Falconer, which was, in my opinion, the best creative pairing the band ever had. Favorite track: Five Ever.

Pete Roberson I presently have a couple of your previous albums and enjoy both of them immensely. By finding this one on Bandcamp I see you have more music that I was not aware of. I will be checking that out as well. Drifting Sun exemplifies the beauty of the progressive rock melodies and moods. just fantastic stuff.
more...

Trip the Life Fantastic is an original and atypical album... professional musicianship and production, not to forget this fantastic and omnipresent sophisticated piano playing.
(Christian Imbault/Big Bang-France)

An album steeped in the classic prog and rock sounds, it's a good revival for Drifting Sun... this will resonate the most with fans of classic prog but others may also find a lot to like here.
(James Cook/Get Your Rock Out-UK)

An excellent release that prog fans should be checking out immediately.
(The Rocker-UK)

A very competent and enjoyable album, there is a lot to like about it.
(Matt Spall/Powerplay-UK)

Trip the Life Fantastic has put Drifting Sun back on the map. A must for those who like neo prog with hard rock influences.
(Wilco Borg/IO Pages-Netherlands)

If you want beautiful melodies, plenty of piano and some strong guitar solos, then Trip The Life Fantastic is your album. four solid stars.
(Ivan Melgar M/Prog Archives-USA)

A group to discover.
(Neoprog-France)

A worthy album to include in 2015s collection.
(Angelo's Rock Orphanage/Prog PLanet-Netherlands)

You must discover this album, listen to it in its entirety to savor every moment.
(Richard Hawey/Profil-Canada)

Drifting Sun has made a nice comeback album here. This is appealing music with a good production that will sit very fine in a neo-prog collection.
(Edwin Roosjen/DPRP-Netherlands)

Drifting Sun is obviously a labour of love for Pat Sanders and he can be proud of this album. Another album is already in the pipeline for 2016 so the continuity of the band will only help to produce a new album of equal quality.
(Dave Smith/Background-Netherlands)

When I listen to some of the variety and flow of the album, I’m reminded a bit of Fragile from Yes... Kudos to them for the achievement of 'Trip the Life Fantastic'.
(Brad Birzer/Progarchy-USA)

It's great that a band that is legit and from that era is sticking to their guns to show younger bands how neo-prog is done.
(Rob/Power of Metal-Denmark)

The talent and experience of this group of musicians is palpable in the melodies, performances and expertise with which they deliver these tracks... a must for all symphonic, neo-prog and progressive rock/metal fans.
(Amalia Grassi/Prog Metal Zone-UK)

If you at all like epic progressive rock, you HAVE to hear this album!
(Jeff Stevens/Prog Metal Zone-UK)

Drifting Sun have absorbed a lifetime's music, and then spat it out as something quite unique... beautiful melodies combining to paint pictures, rich tapestries of notes joined by some simple but effective stitching.
(Tony Colvill/The Progressive Aspect-UK)

I strongly recommend this album to all those who are fans not only of Progressive Rock or Neo - Prog, but Rock in general. It is a really wonderful album!
(George Eleftheriou/GFreedom Webzine-Greece)

This is music! Faultless technique, awesome production, neat compositions... what we have here is something special. It’s Drifting Sun.
( Elias Chatzialexis/Metal Invader-Greece)

Each track really takes you on a journey through atmospheric and spacious soundscapes... this has not left my Spotify playlist since its release.
(Chris J Martini/Prog Archives-USA)

The production, songwriting and talent on display here are bar none... a must for any neo-prog fan.
(Rickdeckhard/Prog Archives-USA)

A beautiful and truly marvelous slice of music that sounds like it was cut by young blood.
(Lear's Fool/Prog Archives-USA)

KILLER album of beauty and emotion, buy this album!... a cinematic and reflective hour of gorgeous classical pop-prog, this band should be a household staple... The album was such a delight I feel like a parent - unable to select any one child over the other :)
(Father Watson/The (N)everland of Prog-UK)

Damu The Fudgemunk shares his recent collab with Def Pressé, plus jams from Common and more